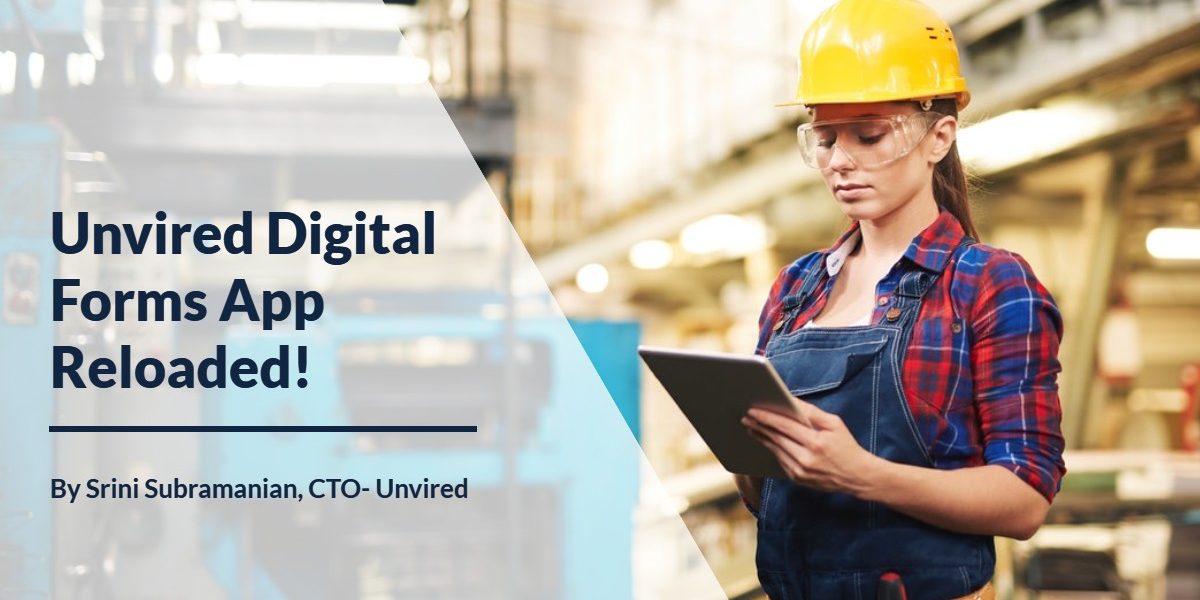 This is the flavor of new seasons everywhere!  Be it web series or movies, every franchise is coming out or has already come out with a new season.  Unvired is also happy to announce the new version 2 of Digital Forms!  In a series of blogs, I will write on what drives the Unvired Digital Forms product, how customers are contributing to it, and how we are evolving it for the future.  But before we embark on that journey, it’s but fitting that I reveal the “prequel” and then start the journey.

The Digital Forms product at Unvired had an exciting start in 2018. We were talking to customers on our flagship Plant Maintenance for SAP product and the forms conversation kept popping up. Customers were collecting a lot of data in disparate ways but almost always had the challenge of updating this data in SAP. Most solutions moved this data to the cloud (Google, Dropbox, etc) but not many were actually able to integrate this with enterprise systems like SAP.  This looked a promising add-on product to our Enterprise suite and we formally started on the Forms journey then.

What was important we heard was that forms were to be customized and designed for each Function/Department/Customer. The most important requirement we kept hearing was that of offline access to forms and data. Additionally, forms had their own validation challenges, they had to accept a variety of data structures (simple fields to variable rows of data), the ability to capture electronic signatures, attach pictures and files, support prefilled data and more. UI came with its own set of challenges with respect to access to different form factors, branding, etc. The approach was fairly obvious to us: the forms had to be HTML5/JavaScript based and needed to have HTML templates that could define the forms. How we would do it was still the question. We already had experience integrating with SharePoint forms and planned to draw on that experience.

The initial design started off with a Mobile First approach and we decided on an Ionic/Cordova based app using the Unvired SDK so that we could support offline, push notifications, secure data storage and communication, user provisioning and all the other bells and whistles that the Unvired Platform supported Out of the Box.  Forms were HTML5 templates that were designed in HTML editors like Dreamweaver or other online tools and uploaded to a Forms Portal.  We also put together a standard data collection set of scripts in JavaScript that we would inject into the form before rendering.  Forms were displayed dynamically, data was also injected as JSON and the data collector script submitted back a JSON of the form data on submission.  Worked really neat and we had a running prototype in no time.  Then we added the PDF export of these completed forms as invariably customers wanted to check in these forms into some DMS such as OpenText, SharePoint, etc for an audit trail.

The first version of the app was deployed at a large customer in North America where we had been having ongoing discussions on digital forms. The customer had an in-house IT team and good HTML5/JS developers. They liked the approach of designing these forms the way they wanted to and quickly started rolling out scores of forms. We also quickly scaled from a few tens of users to hundreds of users across all their different locations.  During this run given the availability of the Unvired SDK on iOS, Android and Windows 10, we were also able to quickly put together the different versions for the different devices and rolled it out. Conversations with a few other customers also started progressing and the solution was also implemented at a couple of other customers.

In the meantime, we also started work on the browser / online version of the product which given the approach of HTML5 forms with JavaScript that we were pushing to devices had its own set of challenges when it had to be used online on the browser. Additionally, we also presented at a few Mid-Market customer forums and had quite a few exciting conversations with new prospects. Everyone liked the solution demos and wanted to take a deep dive with their teams so they could figure out fitment for their requirements and maybe start a POC. It was during these conversations that we got valuable feedback on the designing of these forms. Given that we worked with large enterprises who had their own IT teams, the approach of HTML5 template based forms was completely acceptable but with customers of other sizes (running SAP or otherwise) the approach didn’t gain traction. Most of these conversations ended up with “we like your solution, but designing form templates is not what we want to do”.

This was the fundamental feedback on which we as a team decided to move the Forms version 1 we had into an extended Support schedule so that all existing customers could use the app without issues while we redesigned and reimplemented version 2 of the Forms App.  The requirements for the Digital Forms app Version 2 or Forms Reloaded as we liked to call it were simple:

These were the founding principles on which the Unvired Digital Forms app Reloaded journey started.  During the course of the next weeks, we will delve further into each and every feature that distinguishes the new version of the Forms App and how this benefits customers. Thanks for dropping by, I look forward to taking you along on the journey.  Follow Unvired on Twitter for updates on this and more.